3 months and a week from coming up with the idea at a Flagons Den event, The Zen App is now available to buy.

It's surprising how differently you feel about it when you now know that it is public, not just a project!

I have no doubt that there will be some people that do not like the app very much, some may find it offensive (read the rest of the blog if so, you will hopefully change your mind) and from a coding perspective, it is not the most complicated app in the world, but Squirrel wrote it from scratch, with no knowledge of how to code in iOS.  I think that is pretty awesome.

The original vision was purer than this release, as Apple did not allow the app in the form we wanted to present it.  This has caused us to compromise on the ethos a little, which is a shame, but Apple is Apple.

There may be more to come from The Zen App Ltd.  Who knows?  This is a side project that may develop a life of its own, or perhaps a death of its own.

We're now onto version 4 of the app.  None of the previous versions have been accepted on the app store, hence the title.


I had a call with Apple to discuss the ethos of the app, but to cut a long story short, they were simply not interested!


We have taken direction from Apple and now added an option to change the Zen background colour, we will also be adding a log of the previous times the user has managed to Zen for.


These are not features we really wanted to add, they are not very "Zen" but there is no other way to get the app into the App Store!


Maybe we'll add an in-app purchase to remove the features and restore The Zen App to it's intended form!

The hack weekend is over.


Version 0.1 has been submitted to the App Store and we're pretty happy with version 0.2.


Squirrel was very impressive in hacking the new version to include some Twitter functionality and some of you may even have seen some Zen App tweets!


For now though, it's Apple's time.  Their time use The Zen App to their heart's content and "Zen" for as long it takes them to approve the basic app...(or not)...

Two MacBook Airs and a Squirrel...

I needed a new laptop.  I've never used a Mac before, but decided it was time to go for it.  The apple store in Covent Garden obliged by relieving me (my credit card) of an inordinate amount of money for a MacBook Air. Unfortunately, during the 15 minute set up, the poor Apple chap accidentally scratched it, so they had to swap it out for another one (as of course Apple would!).  They didn't seem to want to offer me two for the price of one though, shame.

This purchase was slightly accelerated (but not by much) by issues that Squirrel was having with submitting The Zen App on an old MacBook Pro.  I met up with Squirrel that evening, with the new (unscratched) Mac and he did what was needed to get us back on track.

The Zen app is now ready to launch.  A basic version at least.

If we sell to anyone 'external' I'll be delighted.  If we sell enough, then we have a product roadmap to take an app that essentially does nothing to the next level.

We now have all the tools we need and have a weekend hack planned soon to get it submitted and work on the first update.

At first The Zen App idea was just satire and irony: use technology to relax and get away from your computer, your phone, the internet...erm...your technology!  The more we talked about it, the more we decided that there was actually no reason for it not to be used as a serious app as well.  Perhaps it could be useful to zone out, to "Zen", looking at a blank screen and listening to my Dad's waves.  Couldn't we all do with a little moment every day to escape the madness of our lives?

We do not wish to be accused of mocking Zen Buddhism, so we have researched and discussed it with people who have first hand experience and have lived in the Far East.

The conclusion that we came to was that the Zen App could have a lot of of different reactions, of course there may be people that say we are exploiting Zen Buddhism, that will be their opinion.  However, other people may find themselves wanting to find out more about Zen, some may find themselves feeling more relaxed and some may just find it funny and may even laugh, which would be great.  After all:

“Laughter is the language of the soul.”
― Pablo Neruda

“It is cheerful to God when you rejoice or laugh from the bottom of your heart.”
― Martin Luther King Jr.

"I am a professional laugher"
― Dalai Lama
Posted by Joe at 00:47 No comments:

Bringing you up to date...

It's now over a week since The Zen App was born as an idea and I thought it was about time I bought you right up to speed:

As well as day jobs and a busy bank holiday weekend this is what we have achieved:
So that's about it.  I'm working on a post about the satirical nature of the app, we do not want the app to appear to be mocking anything, that is definitely not our intention. 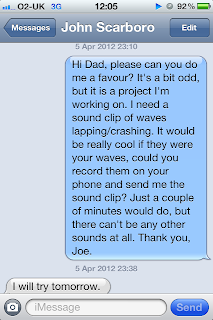 Despite saying he'd try tomorrow (and much to my surprise and delight), at 00:08, the waves arrived by email. I forwarded them to Squirrel for inclusion in the web version he was working on.
Squirrel and I were both riding a wave of excitement the kind that only the startups generate, with both of us currently still in corporate jobs, it was the best thing that could have happened...
Posted by Joe at 14:31 No comments:

In the Q&A after the pitch, someone mentioned Shed Simove (http://www.shedsimove.com/) and his book "What Every Man Thinks About Apart From Sex" and how well it had done - we were inspired.

Squirrel got out his laptop and started looking at domains. Zenapp.com was taken, but we got thezenapp.com and also zenapp.biz for added irony.

My brain was firing in all sorts of directions with the marketing and where we could go with the product, different iterations and future updates with new features.  I was also tasked with finding an iOS developer to get the MVP app off the ground.  The guys @silicondrinkabout retweeted my request and we had someone potentially lined up, he liked the idea too.

After readng the Apple guidelines, we decided the product might not pass due to it's minimalism, so we considered adding some sounds.  We decided the sound of waves was calming (and admittedly clichéd).  I took a quick look at copyright free sound clips to use and found that there was a huge choice.

Meanwhile Squirrel was busy hacking some HTML to get the website up and running (with minimal white space only).  He succeeded in a white site that said "Enter Zen" - when you clicked, it disappeared - simple.

The other pitches passed by and the meeting was over. Squirrel and I continued to discuss and develop ideas. The clock was ticking though, we both had trains to catch, I quickly took a photo for posterity before I left: 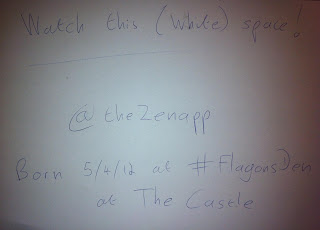 Squirrel and I agreed that he would handle concept and technical, I would handle biz dev, competitor analysis and marketing.


We both tuned out of the meeting as we started building the pitch. I checked out the competition, there was a zen app that had a whole load of controls and settings - not very relaxing if you ask me! I used the Paper iPad app to mock up a white screen (it's a great app, check it out).


We did a demo of the screen, Squirrel explained the concept, I destroyed the competition (it's not like anyone knew about any other zen apps!) We even went into later iterations of the product.

Then it started, the feedback.

Compose the future (see below) predicted that this app had a 99% chance of success. The crowdpoll that was taken also showed very good support.

At the end of the pitch, Squirrel and I shook on it - We were now committed to making it a reality.

The Zen App (@theZenApp) was born out of thin air on the 5th April 2012 at a Flagons Den Startup Pitch Practice (@FlagonsDen) event at The Castle in Farringdon, London, UK.

I walked into the Cockpit room and was greeted by the host Rayhan (@rayhanrafiq), this was when I met Squirrel (@douglassquirrel).  Squirrel had just told Rayhan that he had nothing to pitch and was here to observe, but Rayhan pushed for an idea.  From nothing, Squirrel declared that if he had to do something, it would actually be nothing:


An app with a white screen to encourage people to switch off from technology, the world and achieve a zen-like state.
Conceptually, I liked it a lot.  It needed to be a little more fleshed out, but we started talking and the workings of an actual app appeared.  At this stage however, it was still just idle chat.
The first pitch went by (www.facebook.com/hiddenlittlegems) and Rayhan declared that next, 5 people had to stand up and explain who they were and what idea they had (like a mini pitch).  Squirrel was last and pitched the Zen app.
It was very well received.
I left the room to go to the toilet.
I returned to be informed that we would now be doing a full pitch of the Zen App.
Posted by Joe at 06:28 No comments: